How Do TCP and UDP Impact Control Networks?

IP resides at the network layer of the OSI communications model and provides the basic unit of data transfer, which includes addressing, routing, and fragmentation. The transport layer of this same model resides above the network layer and provides station-to-station communication and a common interface to the application layer. This implies reliable communication, which is either accomplished at the transport layer or at the application layer. With control networks, this is usually accomplished at the application layer since many control networks were designed before the popularity of TCP/IP took hold. Still, there are some control network protocols, such as MODBUS/TCP, which do rely upon the guaranteed delivery mechanism of TCP and there may be more in the future. Actually, at the transport layer of the TCP/IP stack there are two transport protocols, each of which find service in control networks. The User Datagram Protocol (UDP) and the Transmission Control Protocol (TCP) will both be discussed in this lesson.

UDP provides a connectionless and unreliable transport service since it does not issue acknowledgments to the sender upon receipt of data nor does it inform the sender that data was lost. Data integrity can suffer by dropped packets, mis-sequenced packets or by the receipt of duplicate packets. Any of these situations can occur without the knowledge of the sender. It appears that UDP is no better than the IP protocol but there is one big difference. UDP introduces the concept of port numbers, which are used by the application layer that resides above UDP. Port numbers have significance in terms of actions requested by the application itself that require a particular response by the receiving station.

The UDP header is short and simple. Only eight bytes are required in the header. Source and destination ports are each 16-bits long and, therefore, require four bytes. The message length of 16-bits indicates the length of the header and attached data. A 16-bit checksum is used to check the validity of the header and data. The UDP header and attached data, which comes from the application layer, are encapsulated into the IP data field. An IP header, which provides station addressing, precedes the UDP datagram and the complete IP datagram is encapsulated into the frame of the data link layer technology used, such as Ethernet, and sent to the desired station where the complete process is reversed. Notice that the only contribution UDP provided was the assignment of port numbers for use by the application layer. If UDP is to be used, the application layer must worry about acknowledging message receipt, correctly ordering received packets into meaningful messages, discarding duplicate packets and requesting retransmission of faulty packets since UDP does not provide this service. However, if the application layer was originally designed to provide this reliability of service, there is no reason to have the transport layer duplicate effort so UDP makes sense. UDP has low overhead and executes quickly, making it attractive for control networks.

Figure 1 — The UDP header is quite short and, along with its data, it is encapsulated into an IP datagram.

UDP introduces the port number concept. When a station receives an UDP datagram, it serves up the port number to the application layer, which then allocates a buffer area for the attached data. The port number has significance since it identifies a particular application. Since there are many port number possibilities, several different applications can be simultaneously supported on the same station.

For example, if station A requests a trivial file transfer protocol (TFTP) service (TFTP happens to use UDP) from station B, it would insert a 69 (a well-known port assignment indicating TFTP services) into its destination port. A dynamic (random but non-conflicting) number will be put in its source port and the request will be sent to station B. Station B would receive the request and recognize it as a TFTP request from station A since port number 69 was used. Station B would then begin executing the process. But it would insert a 69 in its source port, and the dynamic number that was generated by station A in its destination port, and send the response to station A. Station B knows how to handle this particular application since it recognizes both the source and destination port numbers. The use of port numbers along with the IP address creates what is called a socket, which can be represented as <netid, hostid, portid>. As long as there is structure to the assignment of ports, the socket assignment becomes a unique representation of a particular application on the complete IP network.

Both UDP and TCP use port numbers and, if possible, the same assignment is used for both. The 16-bit numbers are classified as either assigned (well-known), registered or dynamic (private). Port number assignments are maintained by the Internet Assigned Numbers Authority (IANA) and the complete list can be found at http://www.iana.org/assignments/port-numbers under port numbers. Numbers in the range of zero to 1023 are classified as well-known and are used by common processes. However, individual organizations can register numbers in the range of 1024 to 49151 for proprietary purposes and will not be used by other organizations. Looking at the list, we find some companies in our industry. Opto22 has registered 22000 and 22001 for their SNAP I/O and Opto Control products. The BACnet building automation protocol has registered 47808. DeviceNet and ControlNet intend to use 44818. Interestingly, the MODBUS/TCP specification calls for port 502, which is in the well-known port group. Port numbers 49152 to 65535 are considered as either private or dynamic and can be used by anyone.

The second transport layer protocol is TCP which provides for a connection-based reliable message delivery service for processes. This relieves the application layer the responsibility of guaranteed message delivery. Besides reliable connections, TCP provides flow control to ensure stations are not flooded with data.

TCP's header is larger than that of UDP but uses the same port assignment scheme as UDP does. Unlike UDP, a 32-bit sequence number and acknowledgment number are included in the header as well as several flag bits. Only a few of the flag bits will be discussed here. Since the TCP header can be of varying length depending upon the content of the options field, a data offset field has been provided in order to determine the actual beginning of the data. The padding field has been provided so that the options field along with the padding field will end on a 32-bit boundary. This is typically done with all the headers within the TCP/IP stack. A window field in the header indicates to the sender how much data the receiver is willing to accept. This feature is used for flow control, which attempts to prevent buffer overflow in the receiver. Finally, data follows the TCP header. The header can be up to 40 bytes in length and the header with its appended data is called a segment. A checksum field ensures the integrity of the header and its associated data. 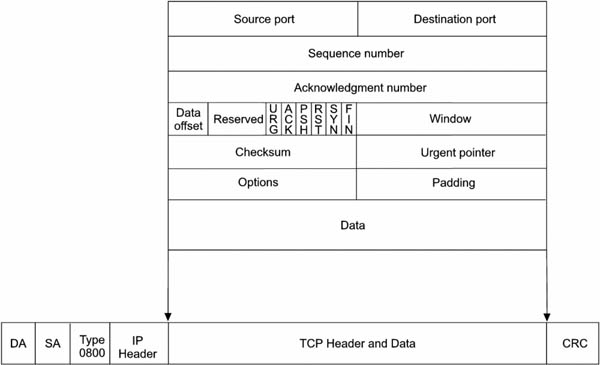 Figure 2 — The TCP header is much more complex than UDP. Its length can vary, too.

Figure 3 — A full-duplex connection must first be established before data can be transferred using TCP.

Flow control is the management of data transfer between two stations. Depending upon the role of the station, be it client or server, or its processing power, a station may not be able to keep up with the network traffic. In order to slow down events, the TCP header has a field called window. The receiving station sets a value in the window field informing the sender how many bytes of data it will accept. The window is dynamic and the window can be increased as buffer space in the receiver becomes available. The window can also be zero halting transmission. If the sender still needs to communicate important information while in this condition, it can send out a segment with the URG (urgent) flag set along with a sequence number in the urgent pointer field that indicates the first byte of data following the urgent data. The receiver should always allow room for urgent data.

Although TCP is more reliable than UDP, UDP can be quite effective if the application layer can handle error checking and retransmission. For applications that require secure communication, TCP is the best choice. Both TCP and UDP use port numbers and when used with IP addresses create unique socket definitions across the network. These socket definitions facilitate the processes between the stations on the control network.